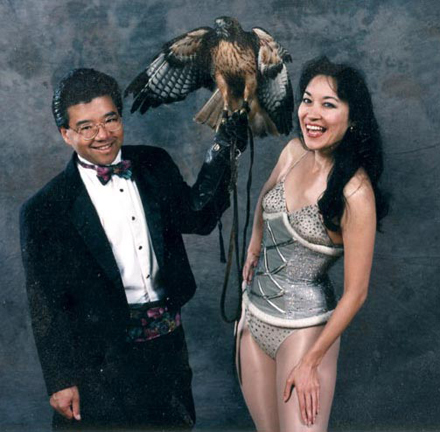 Born in Portland, Oregon in 1955 and a graduate of Portland State University with a Bachelor of Science in biology, Mike spent his college years as part of a research team training orangutans and polar bears in the Portland and Honolulu Zoos. His post graduate years were spent in Alaska pursuing his first love, magic. Grants from major corporations, school districts and art councils have helped bring his show into over 200 Alaskan villages and small towns. Mike traveled from Point Barrow to the tip of the Aleutian Islands by dog sled, snowmobile, riverboat and bush plane over ten incredible and unforgettable years. Mike has even performed his magic on the frozen Russian-American border on the tiny island of Little Diomede in the center of the Bering Strait.

Since moving to Orange County, California, from Alaska in 1988, Mike entertains for private parties at Disneyland and Knott’s Berry Farm. He frequently appeared at Magic Island in Newport Beach until its recent closing and is a featured magician at the Magic Castle in Hollywood. He can be seen periodically in television shows and movies including Independence Day, Rush Hour, Lethal Weapon 4, Austin Powers 3, Batman Forever, Baywatch, Murder She Wrote, NYPD Blue, Power Rangers.

When working on a grand scale, Mike recreates the dangerous feats of the great Houdini. He escapes from a straitjacket while suspended hundreds of feet in the air or survives being locked inside a water-filled milk can. With a blink of an eye, he magically trades places with his attractive assistant and he even saws her in half with a giant buzz saw.

On a smaller scale, Mike works with Chinese silk scarves and his rabbit. To encourage audience participation he has even resorted to burning a hundred dollar bill borrowed from a member of the audience with hilarious results. The audience will become awestruck when Mike duplicates Houdini’s legendary and dangerous feat of swallowing razor blades.

In his spare time, Mike enjoys playing classical piano and practices Chinese watercolor. He has produced several one man shows with his paintings at various art galleries. He is also an accomplished Chinese chef and has entertained many people with his cooking demonstrations, mixing his culinary skills with a dash of magic and a pinch of comedy…WOK WITH WONG!